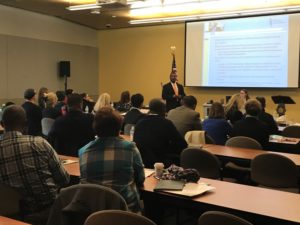 Establish a strong legal position before your employee’s attorney does.

The Act also prohibits harassment of a person because of his or her age. Age discrimination in the workplace is prevalent, with 2/3 of older job seekers reporting discriminatory encounters.[1]

When developing affirmative defenses to the Age Discrimination in Employment Act violations and EEO laws,  it is more important than ever for Colorado employers to understand their state’s case law regarding EEOC age discrimination in the workplace and to take action to ensure no lawsuits are filed against them.

Call our Denver CO Age Discrimination in the Workplace defense lawyers today at 720-941-7200.

IS AGE A PROTECTED CLASS?

Regarding EEO laws, there is a split among judges in Colorado district courts concerning the burden for proving employment age discrimination in the workplace that has not yet been resolved or even acknowledged. For example, in Sherman v. Motorola Sols, Inc.[2], Judge Hegarty cites Gross v. FBL Fin. Servs., Inc.[3], stating that the burden is on Plaintiff to prove that age was a but-for cause of the challenged adverse employment decision. Six days earlier, in Jaffrey v. PorterCare Adventist Health Sys.[4], Judge Wang acknowledged the Supreme Court’s decision in Gross, but stated that the binding precedent in the Tenth Circuit holds an employer liable under the EEO Age Discrimination in Employment Act “if other factors contributed to its taking an adverse action, as long as age was the factor that made the difference.”[5] Age need not be the sole factor under Jones, and thus the burden-shifting McDonnel Douglas framework applies until “further action from the Supreme Court or an en banc decision of the Tenth Circuit.”[6]

TIP:  This is good for employers to know, as when they are writing EEOC position statements or answering complaints, they can argue that the Plaintiff must meet the more burdensome standard of Gross, but they must be aware of this district split.

In Sherman, the employer motioned for summary judgment on Plaintiff’s claims under the Age Discrimination in Employment Act and CADA for disparate treatment based on constructive discharge, retaliation, and failure to promote. As for constructive discharge, the motion was denied, as case law strongly favors this issue being decided by a jury, and the judge found that the evidence presented was subject to more than one interpretation. Here, the employer made the mistake of implementing a Performance Improvement Plan (“PIP”), then changing it last minute before termination.

The key to PIPs is consistency; they are a set plan to improve performance and should not be changed as they are implemented. This makes the employee’s job security wholly unpredictable. If a PIP is completed, and improvement is still needed, another PIP should be implemented after the employee has completed the initial PIP. Otherwise, as in this case, it could be interpreted as an attempt to push an employee to termination by continuously moving the goal post. Additionally, if a PIP is difficult or impossible, that could be considered materially adverse in that it is meant to lead to termination.

Additionally, proximity can be used to prove motivation for an adverse employment action in the Tenth Circuit. In this case, the PIP was issued two weeks after the Plaintiff complained about negative conduct by his coworkers based on his age. The court found that these facts about age discrimination in the workplace precluded summary judgment for the retaliation claim.

TIP: When employers receive complaints about violations of EEO laws, not only should they thoroughly investigate and create reports, they should also note when the complaint occurred and make a conscious effort not to retaliate against the employee.

The employer succeeds in getting the failure to promote claim dismissed, as Plaintiff did not include this claim in his EEOC charge.

TIP: Employers should thoroughly read all EEOC documents to ensure plaintiffs have exhausted their administrative remedies for each and every claim.

In Applegate v. Health Consultants, Inc., the court found that the termination of an elderly couple for acting aggressively and threatening the safety of other employees was a legitimate business decision.[1] Workplace violence is a great matter of concern in Colorado, and courts give great deference to employers when it comes to safety. Additionally, the couple was hired when they were older than fifty, which negated any age bias.

In DePaula v. Easter Seals El Mirador, the employer succeeded on a motion for summary judgment by proving it had two legitimate reasons for termination: financial difficulty and Plaintiff’s inadequate performance.[2] The employer did this with extensive evidence, including financial statements, meeting minutes, numerous employee testimonies and affidavits, Plaintiff’s termination letter, memos sent to Plaintiff during his employment regarding his poor performance and suggested changes (which he failed to implement), and a documented fine for which the Plaintiff admitted responsibility. Plaintiff could not prove the proffered reasons for termination were pretext, as there was so much evidence to show otherwise. This shows that employers who do the legwork in the workplace instead of in litigation often save themselves time and money in the long run.

TIP: Documenting every single performance issue and meeting, in intricate detail, at the time it occurs, makes all the difference. Documenting these instances post-termination only increases suspicion of discriminatory intent.

TIP: Detailed termination letters with attached documentation of performance issues also often serve as a deterrent to litigation. It is helpful to consult with an employment attorney when terminating an employee to write termination letters, and/or to ensure that the correct steps are taken.

In Bondarenko v. Potter, the employer won a motion for summary judgment of an Age Discrimination in Employment Act claim because applicants who were selected for promotions were over the age of 40, and thus were members of the employee’s own protected class.[1] Decision-makers were also wholly unaware of Plaintiff’s age. Additionally, the employee failed to show pretext because the applicants had experience in the positions they were selected for, while the employee had none.

The employer also won the motion regarding an ADA claim because the Plaintiff failed to show the connection between the adverse employment actions and his disability. Again, Plaintiff was unable to prove that the decision-maker in this situation knew of his disability. Employers who base their promotion decisions on employee’s merits, and can prove such, will usually not have an issue getting the claim dismissed.

If you are a Colorado employer and need immediate help developing Age Discrimination in the workplace defenses in an EEOC case, call us immediately at 720-941-7200. FREE INITIAL CONSULTATION about EEO laws.

The information provided on this website does not, and is not intended to, constitute legal advice; instead, all information, content, and materials available on this site are for general informational purposes only. Information on this website may not constitute the most up-to-date legal or other information. This website contains links to other third-party websites. Such links are only for the convenience of the reader, user or browser; the ABA and its members do not recommend or endorse the contents of the third-party sites.

Readers of this website should contact their attorney to obtain advice with respect to any particular legal matter. No reader, user, or browser of this site should act or refrain from acting on the basis of information on this site without first seeking legal advice from counsel in the relevant jurisdiction. Only your individual attorney can provide assurances that the information contained herein – and your interpretation of it – is applicable or appropriate to your particular situation. Use of, and access to, this website or any of the links or resources contained within the site do not create an attorney-client relationship between the reader, user, or browser and website authors, contributors, contributing law firms, or committee members and their respective employers.

The views expressed at, or through, this site are those of the individual authors writing in their individual capacities only – not those of their respective employers, the ABA, or committee/task force as a whole. All liability with respect to actions taken or not taken based on the contents of this site are hereby expressly disclaimed. The content on this posting is provided “as is;” no representations are made that the content is error-free.

Any cookies that may not be particularly necessary for the website to function and is used specifically to collect user personal data via analytics, ads, other embedded contents are termed as non-necessary cookies. It is mandatory to procure user consent prior to running these cookies on your website.